Thats part of why IBM has run the Master of the Mainframe competition since 2005, as a way to entice students to learn the intracicies of the mainframe.

Contestants have three months to complete the Master of the Mainframe challenge. McKee finished in two weeks.

A 22-year-old senior at the University of North Texas was the first woman in the U.S. to win an IBM mainframe coding competition.

Mainframes are still widely in use at banks, insurance companies, and other big businesses that handle lots of credit card transactions. 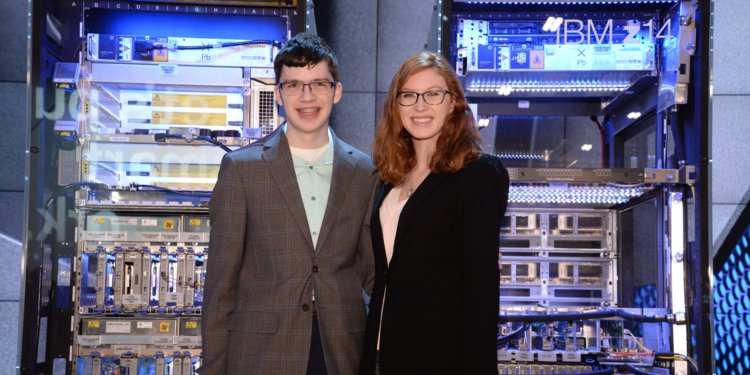 Fast forward to today, and meet Anna McKee, a 22-year-old college senior at the University of North Texas, who was named the winner of the IBM Master of the Mainframe programming contest last week making her the first woman from North America to take the title.

I had no idea I was the the first female win in North America, said McKee. I was just trying to do the best I could.

Its something that really surprised me and I really hope that things are shifting so that more women are getting into technology, she said.

Her prizes: A $2,750 travel stipend to go to the closest IBM head office to meet with executives and recruiters; an HTC Vive virtual reality headset; a Master of the Mainframe hoodie.

Thats when things changed. She enjoyed programming in Java so much, she declared a major in business computer information systems. She also joined the Association for Information Systems, a professional association for the IT industry.Advertisement

And shes noticed a promising change, too. Over the past year, McKee said, more women have been attending AIS meetings. A few weeks before IBM told McKee she won Master of the Mainframe, she noticed something unusual at the latest AIS meeting: the room was about 50% women.

Anne McKee started coding just three years ago with a class at a local community college.

McKee was, truly, shocked that she would win. She had only started coding three years earlier, starting with a class at a local community college. She entered the contest thinking she would have a hard time even completing it. She never thought she actually stood a chance. In fact, she only competed because both of her parents work with mainframes, and urged her to enter.

The Master of the Mainframe competition takes the form of three rounds of challenges, culminating in a stage that requires contestants to build their own application by sorting and tracking data from over 600 companies. Contestants connect to a IBM mainframe virtually, from a terminal on their own computer.

This year saw the biggest turnout in the contests history: 17,000 students, 23% of which were women, all competed McKee was the only woman to place among the 15 global and regional winners.Advertisement

I started saying oh my gosh repeatedly and my poor parents who I was on the phone with thought I got into a car accident or something, McKee told Business Insider, of the moment she won. And then they just started yelling on the other end. They were so excited. It was awesome.

You might think of the mainframe computer as long-gone relic of the Cold War. But banks, especially, still rely on modern versions of the old classic: Theyre huge and old-fashioned, sure, but theyre also proven to be mega-reliable.

We really want to give students a learning opportunity on one of the worlds biggest enterprise IT platforms, Meredith Stowell, director of community engagement and skills for IBMs Mainframe team, told Business Insider.

I worked day and night to complete it, McKee said. Everything else, my homework and everything, was put on the back burner.

In high school, McKee was particularly adept at math and music, but didnt know how that could translate into a career. On a whim, during the summer after her freshman year of college, McKee enrolled in a basic C++ programming course at a nearby community college. She struggled through it, but she was intrigued and decided to sign up for a class in the Java programming language.IBM

The mainframe might have fallen out of favor, as PCs, smartphones, and now cloud computing give people access to so much computing power in much smaller packages. The problem is that, even though mainframes are still so critical at many businesses, programming novices are getting drawn to the newer platforms, causing ahuge skills shortage.

McKee was one of three global winners among 17,000 students that participated in this years competition.